I may be a little late to the party but I just learned the term Gun Bunny. Women like this reflect badly on women in the industry, They dress inappropriately for the range and pose for pictures with unsafe gun handling then get all defensive when called on it. They have cutesy names, and trade on their looks for goodies from manufacturers.
The opposite of the women I know who are serious, safe and have IQs higher than our bust measurements. I can not tell you how proud I am to be associated with this amazing group of women.

For the Gun Bunnies, you do us a disservice, posing as "real" shooters while pointing a gun at yourself and justifying with "It isn't loaded and I can't reach the trigger".  You think it is cute to pose in a bikini top with a gun.  If this is you, you are a poser.  I'm sorry if you are offended, but you damage the female shooting community every time you do the cute little pouty face over the barrel of a gun.

Real women Shoot!  Real women are Serious, and Safety Conscious.  It doesn't matter if we are young and nubile or old and wrinkled.  We care about the sport, the industry and sharing the concepts of safety and responsibility.

If you recognize yourself, take this as a wake up call.  You are not helping anyone, not even yourself.  We are laughing at you and calling you what you are.

Wake Up sister, no one likes a poser.

SAFE SHOOTING
Posted by me at 1:01 PM No comments:

Woo-Hoo!  Getting ready to head to Las Vegas! You know the saying, What happens in Vegas, Stays on FaceBook!

If you have not had to chance to go, Shot Show in a word in AMAZING!  Everything and everyone affiliated with industry.  And, like the rest of the shooting community, they’re NICE!  I live near Washington DC.  So, I’m used to big city rudeness.  Imagine my shock when med held doors for me, or stepped aside for me to get on the escalator?  WOW!  Then, the true celebs in the industry, Jerry Mickulek, Julie Golob, Kathy Jackson, Ted Nugent, Joe Mantegna (rrrrrrrrrr), Mike Seeklander, Rob Pincus, Lisa Looper, Vicki Farnam, Julianna Crowder…and there are the minor league celebs…people still working their way up, like me!  Ok, ego aside, it is fun to be treated like a celebrity, even a minor one, for a few days.  I’ll be signing books, hanging out at booths doing autographs (still can’t believe people want my autograph, but I like it!)

To give you a little glimpse into the world of Shot Show below are some photos from the past 3 years.  Can’t wait to get more for this year!!  If you are going, come by Anglers Book Seller on Tue between 2 and 3 and say hi, I’ll be signing The Home Security Handbook! 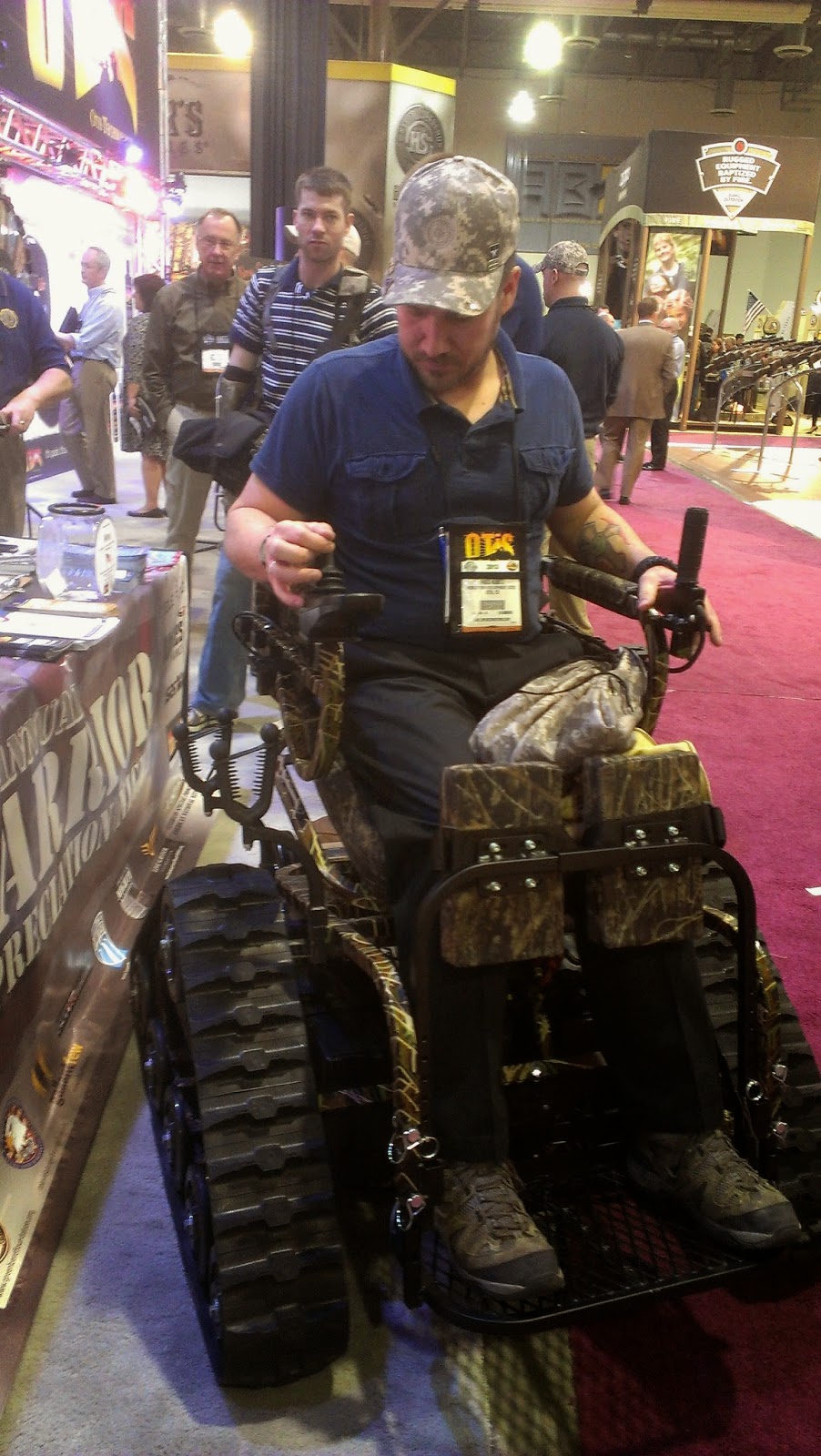 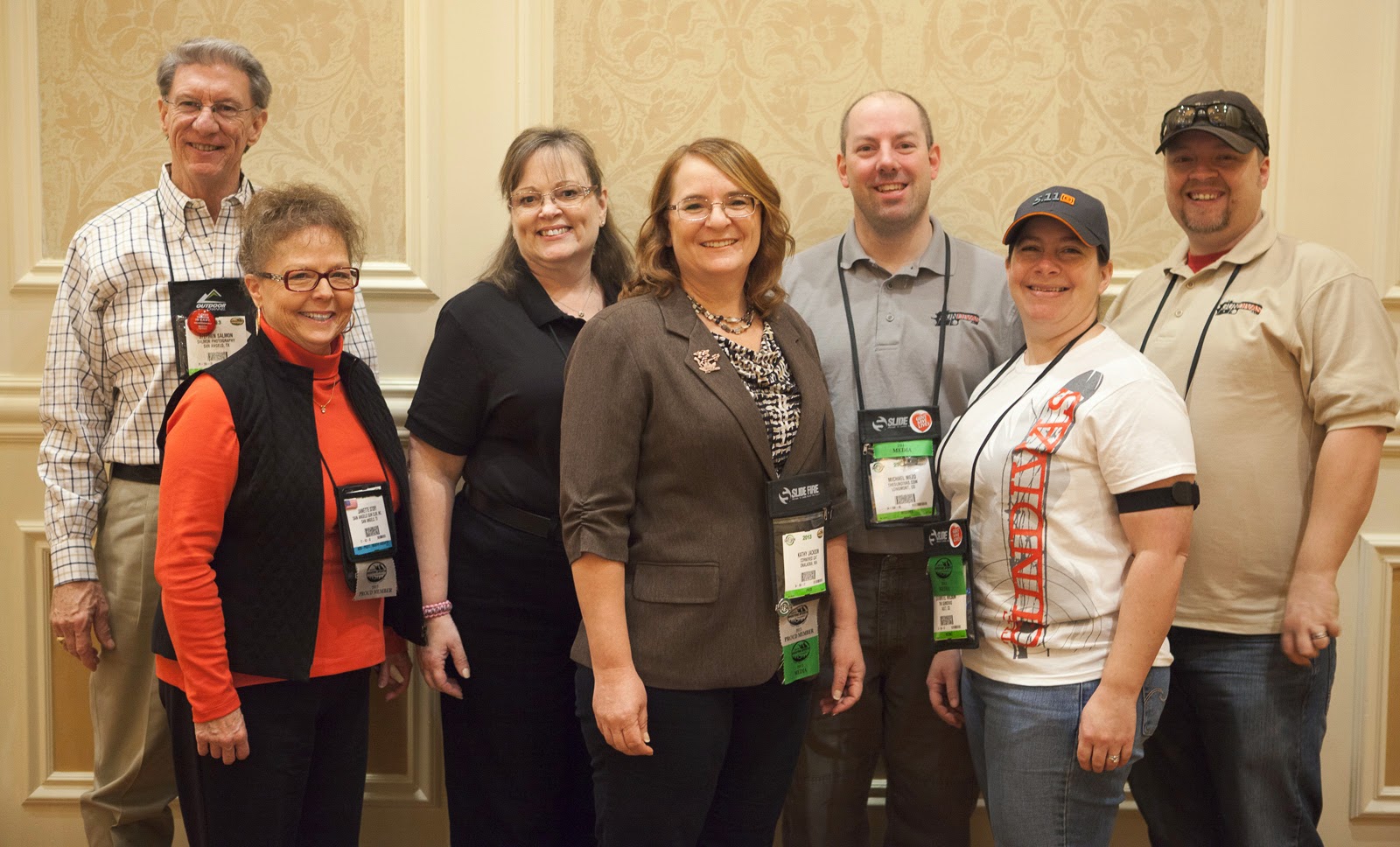 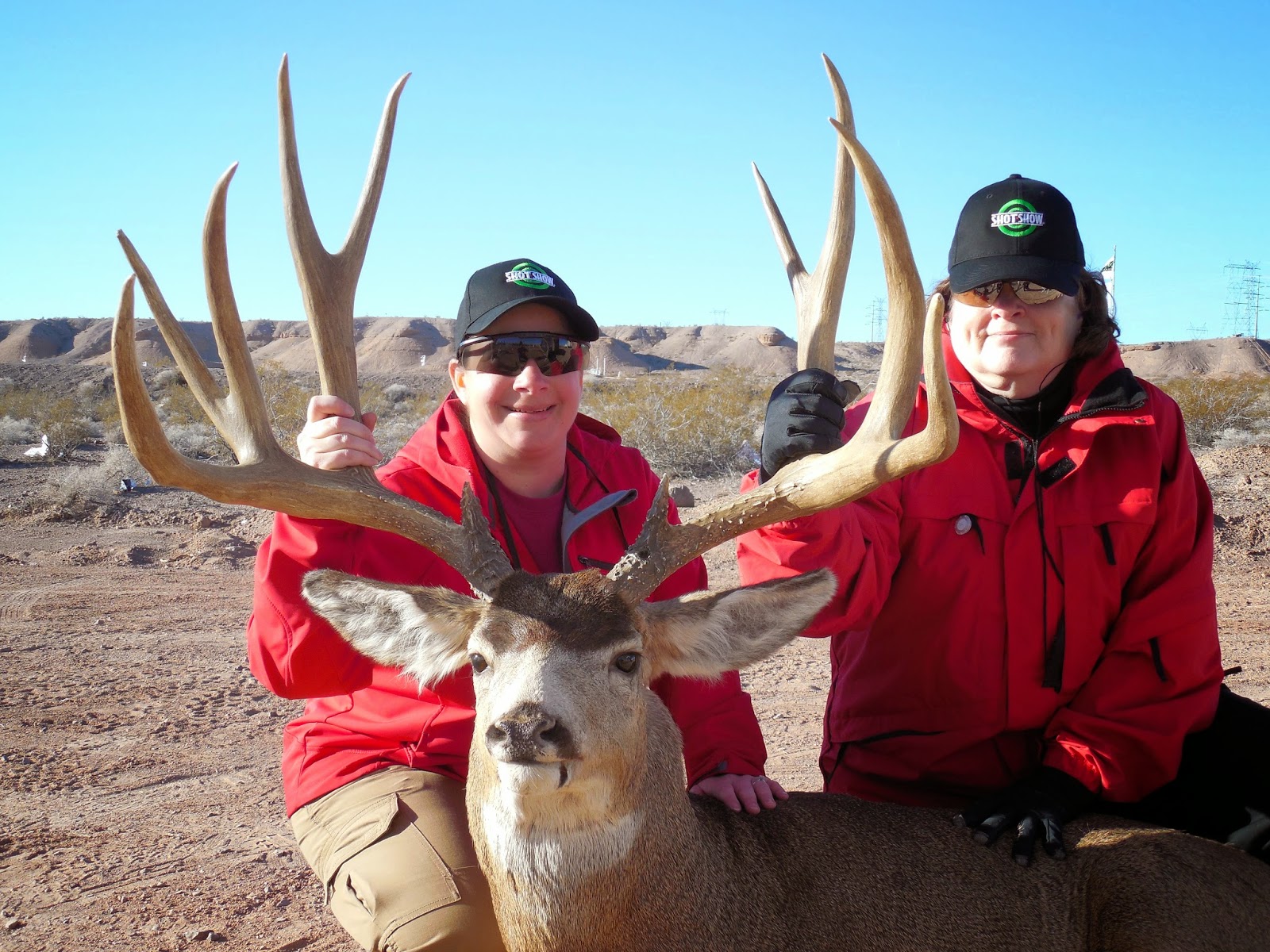 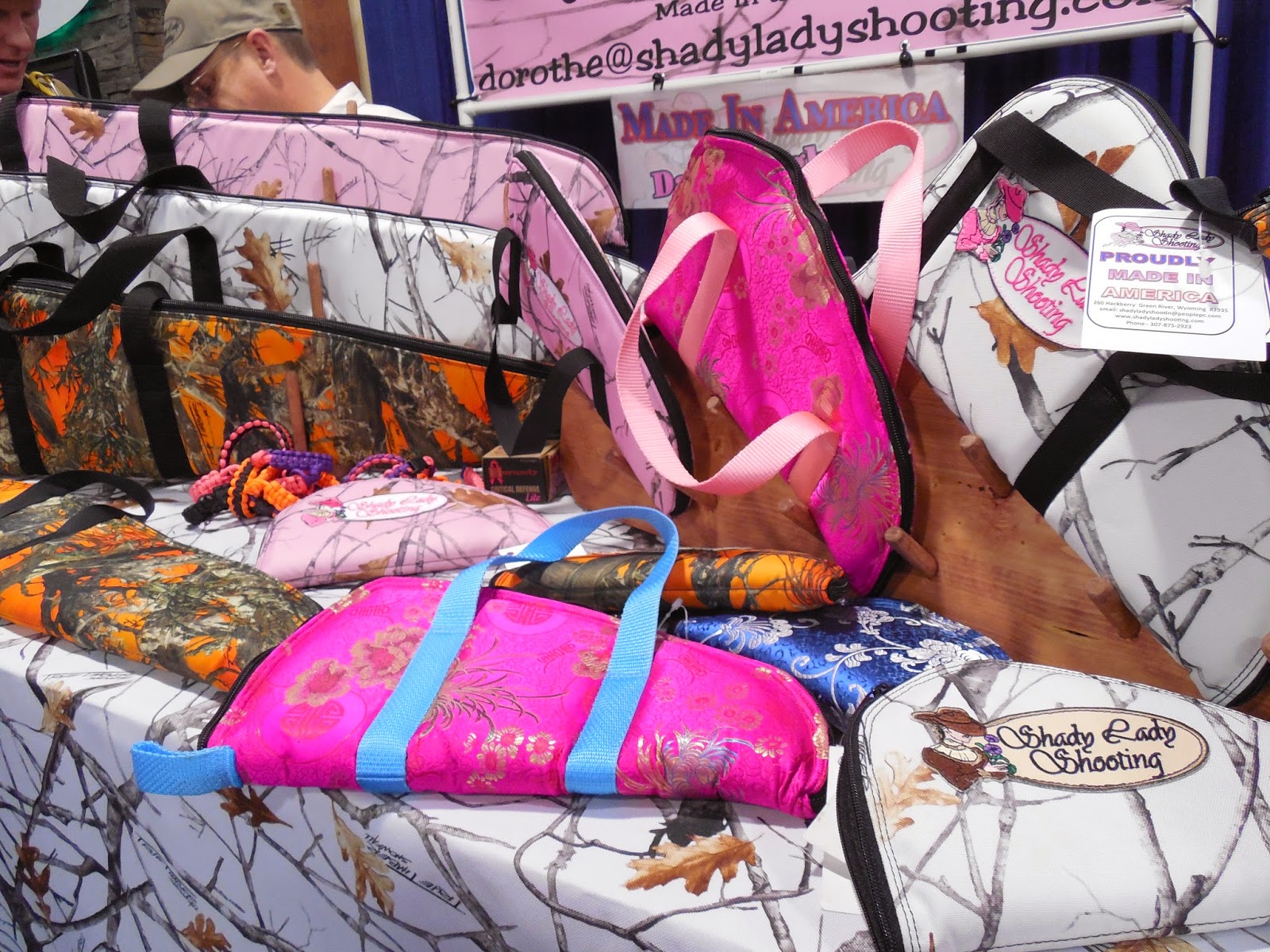 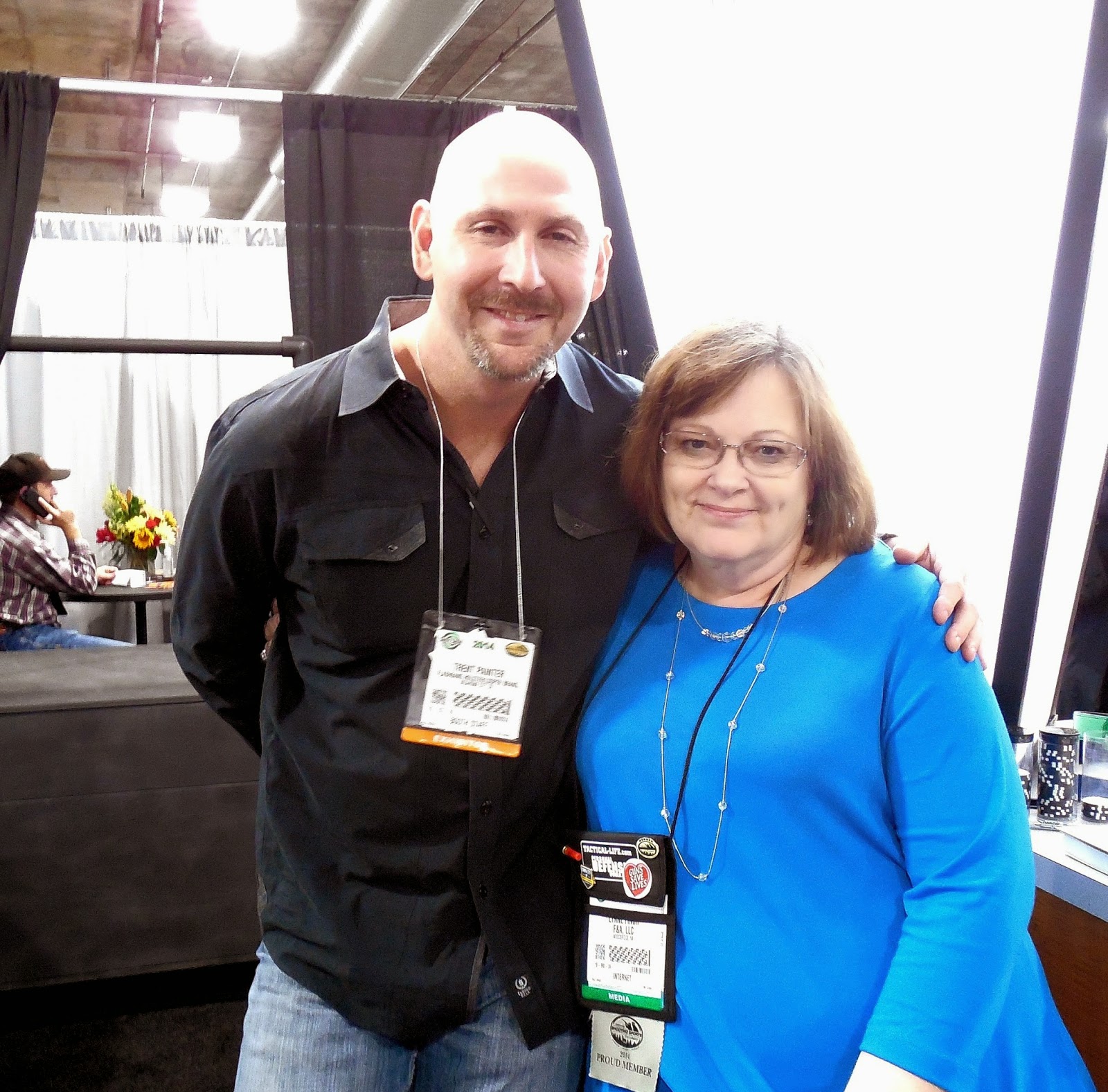 We Need More Women Shooting Coaches
By Sally Stevens
The youth shooting sports demographic has changed in a positive way over the last several years,
moving from predominantly male to a greater balance of male and female shooters. There
continues to be, however, a significant lack of female shooting coaches across all shooting sports
disciplines. This is totally logical, in my opinion, as the usual time progression for shooters
moves from youth shooter to adult shooter and, possibly, adult coach. I believe there is an
untapped resource out there to change this pattern, as waiting for our many young female
shooters to become coaches and mentors does not need to be the only way to increase female
shooting coaches.
How do I know this? As a 42-year-old widow and mother of three youth shooters, I was asked by
their coach to try the sport, just for fun. I declined twice but, being a good Minnesotan, politely
accepted on the third offer and shot 2/25. My score was bad, clearly, but a spark was ignited in
me and I was hooked on both the sport and shooting competition! Within my first year I logged
in over 10,000 targets in practice and competition, completed the NRA Level 1 Shotgun Coach
class, and started helping the coach who first introduced me to the sport.
Was I, initially, afraid to try and, more accurately, afraid to fail, especially in front of my
children and everyone else at the club? Absolutely.  Ultimately, though, it was the
encouragement I received from coaches, parents, fellow shooters and, especially, the pride of my
children and my love of the game that propelled me forward.
Now, as a NRA Certified Level II Shotgun Coach and a member of the National Shotgun Coach
Development Staff, I train, mentor, and encourage women to take their own leap of faith to
become shooters and coaches.  I encourage you to reach out to mothers, sisters, aunts, female
friends—these are just some of the many women in our shooters’ lives who have the potential to
become influential, impactful coaches and mentors.
In Minnesota I mentor several women coaches who, like me, had never shot a gun before
adulthood but are now positively influencing hundreds of youth as successful coaches. Coaching
doesn’t stop with our athletes; it extends to finding those who can impact positive change in our
disciplines and coaching them towards success.
Mothers of youth shooters are some of my favorite people.  Granted, that may be because I
started out as a mother of youth shooters before also becoming a shooter and, ultimately, a
coach, but mostly it’s because there is something very powerful about a mother committed to
your shooting program.  Many of my hardest workers, organized and dedicated volunteers, and
most passionate coaches are women.  Several did not start out this way and, in fact, did not want
their children participating in shooting sports at all!
A few tips, choice words, and education usually help even the most cautious, protective parent to
view shooting sports in a more constructive light.
As a coach I am particularly tuned into all attendees on registration day, with youth shooters
usually very excited and parents in tow. In my experience, I find parents with reservations,
usually mothers, wait until the paperwork is done before asking questions regarding safety,
procedure, or expectations. This is a crucial time and one not to be brushed off. The question you
are really being asked is, “Will my child be safe?” Know that it is not enough to simply tell a
parent that yes, everything will be fine—it is your responsibility as coach to prove safety is first
and foremost in your program.
Part of the requirement for all our shooters, from new shooters to our national competition
squads, is to attend our 30-minute safety class annually. No exceptions. We also require parents
new to our program to attend, followed by a new shooter orientation, another 30-45 minute class
outlining expectations, responsibilities, and the basics of our sport. During this time I see the
biggest change in parent attitude as, most often, fear is predicated by a lack of information.
We follow this with a question and answer session, and end with a call for adult volunteers! I am
always struck by the number of women who previously expressed concerns but after attending
the safety and procedure classes, they become our biggest support system. In fact, many of our
shooters mothers have asked for instruction and some have even started their own league at our
club!
Education and participation through volunteering is key to helping cautious parents become
comfortable with all disciplines of shooting sports. If a parent expresses concern, rather than
being dismissive or flippant, invite them in to be a part of the program. You will be surprised
how inclusion can improve and grow your program, change the dynamics of your club and,
ultimately, solidify the future of shooting sports.
My challenge to you is to encourage women to step forward, ask them to become coaches, and
have our coaching teams reflect the same, changing demographic of our shooters and everyday
life. It’s a good thing.
Author
Sally Stevens
Working on her Masters in Sports Psych and is a mom/step-mom to eight kids, nine grandkids.
She is a NRA Shotgun Coach, Level II and a member of the NRA National Shotgun Coach
Development Staff.  She coaches both competitive and youth programs, mentors youth and
women coaches. She is a Board Member of the Minnesota Trapshooting Association. She
founded and runs a nonprofit for youth competitive shooting in Minnesota. She has won the 2009
Minnesota State Ladies Handicap Championship, 2011 Heartland Grand Lady Singles
Championship, 2012 Ohio Lady Handicap Championship, Captain of the 2014 Minnesota Lady
All-State Team (been on the team for six years straight, twice as captain). And co-head coach of
the 2014 Minnesota State High School League Clay Target Champions.